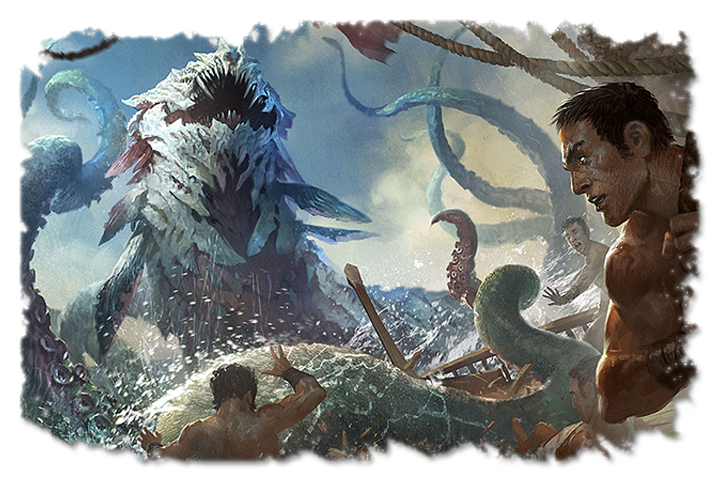 The companions start their journey back, with Captain Flynt’s Treasure in their packs and the divine Book Of Exalted Deeds in their possession. Harry examines the book carefully and comes to the conclusion that only a paladin can open the angelic lock and use the books power. Simone tries to persuade them that if they sell it they will gain more wealth than they can ever imagine. She promises that they can acquire an army, a castle, ships and whatever else they want, but she fails to persuade any of them. Olo suggests that Damien could use the book, but first they should find a way to free him from the soulgem. Harry needs a circle of spellcasters, to make a ritual so the can access the gem. The arcane brotherhood or the emerald enclave, could posses the skills to perform the ritual. As they reach the shore they find the sailors fighting the creatures of the sea called Sahuagin. Until they reach the ships the fight is over and Jimmy Bear with the men drove of the attackers. Three sailors died and some are injured, but all of them are scared with broken moral. Quinn and Thornalf decide to give their share of the treasure to the sailors and the dwarf speak to the heart of the men and inspire them. While the ships sail towards the narrow passage, that will lead them out of the bay, a huge sea monster embraces the stones with his tentacles blocking their exit. The Shahuagin attack the two ships from the sea. A roar echoes in the sky and the huge green dragon flies towards his nemesis of the depths. Wings clash with tentacles and lizardfolk appears from the jungle attacking the Sahuagin. Simone leads the ships underneath the fighting monsters and finally they reach the ocean, leaving the savage island and its mysteries for good. The days pass in the sea and the first day of the Tarsak, they are getting close to Luskan. They are sailing towards a storm, this morning. Under the dark clouds they see a dozen ships from the North with Kurth, Taerl, Suljack and pirate banners united under the Luskan flag. From the south about half that many ships move to formation. In the morning air of the sea of swords, waves the white and blue flag of Neverwinter.

We've already been saving your edits, so if you upgrade now you will have instant access to your previous versions. Plus, you have our no risk refund guarantee , so there's nothing to lose.

Session 32 : The Eye Of The Beholder Act II - The Darkening

Session 31 : Lake In The Mist Act II - The Darkening