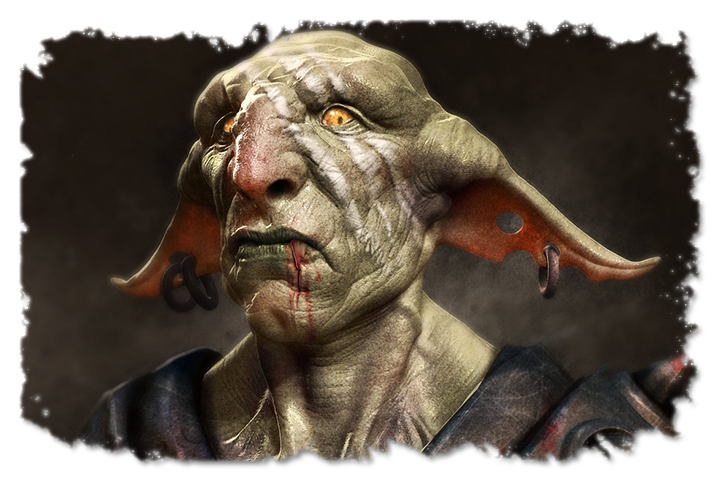 Snort was waiting patiently, in the cold goblin-hole with his kinsmen. The gnolls caught up the scent of a caravan on the tradeway the night before. Their leader the Big Ogre, ordered to ambush the travelers at midnight. There has been weeks without a proper raid, since the darkening. So now, all those goodies were theirs for the taking. And the best part, there were mostly women and children in the caravan, guarded by a knight and his squire. Ha! That was the kind of business, Snort, loved to do! Easy, peasy, lemon squeezy!

But, oh no, you can’t seriously think that a Goblin can actually be lucky? Things couldn’t just be fine, could they? A party of adventures HAD to be there! They HAD to save the poor bastards and slaughter the goblinoids, right? And they did. And you know what else they did? They captured poor ol’ Snort. And tied him up to a pole. A red faced dwarf beat the shit out of him and gag him with a dirty shock. And then he asked him questions! In dwarvish ! How the fudge am I supposed to answer to you?

Then, there was that crazy halfling, scary little motherfudger! He was talking about dismembering Snort and reassembling his parts in different positions. Balls to eyes, that kind of nasty things. Snort broke down eventually, after tremendous resistance and agreed to lead them to their lair. Even then he had to walk in the steppes tied to the pole with that rag in his mouth. And they didn’t even follow his directions.

The human scout picked up the fleeing Raiders trails and guide them to some other entrance to the lair that Snort had no idea about. The dwarf asked him if this is the place and Snort truthfully answered that this wasn’t his neighborhood. And guess what he got in return. That’s right, a big fat punch in the face! Knocked his teeth out!

While he was unconscious the crazy adventurers hang him upside down to the entrance of the lair, and massacred everyone in the Big Ogre’s gang. It was mental! They left and it didn’t even cross their mind to put poor ol’ Snort down.

So I’m still here, hanging out, like a damn pinata. So I was wondering if you could…just…wait were you going…WAIT…COME BACK…..DON’T LEAVE HERE……HEEEEEEELLLLLP!