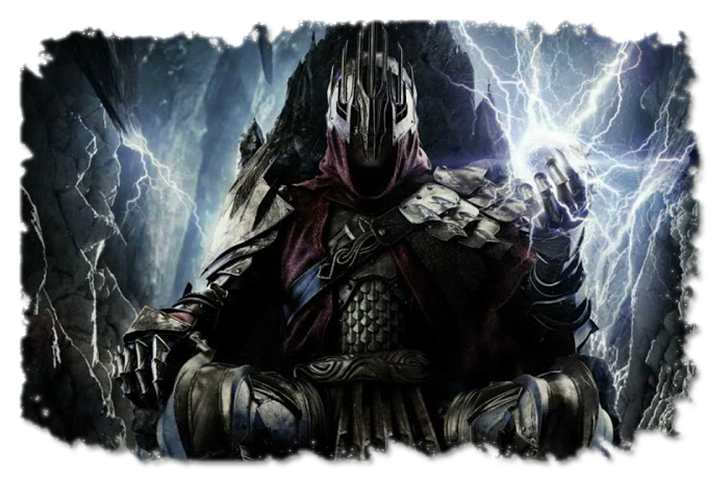 Myrtul 7, 1484 DR Year Of The Awaken Sleepers
Caravan Trail, The Spine Of The World

The heroes return to the caravan with the lost children and bury the dead refugees. They learn about the fall of Mirambar from Hartusk’s horde. The refugees speak with terror and despair of the Manyarrows army.

“There were thousands of Orcs allied with drows and giants and a great black dragon. We never stood a chance laddy.”, sais Otor Ironfist, the old dwarf blacksmith.

They decide to head towards the capital city of Ten-Towns, Bryn Shander, a couple days away. The night they camp on the side of the trail that cross the spine of the world and connects the Sword Coast to the Icewind Dale. The cold night goes by and as the campfire slowly dies, a thunder sounds in the cloudy sky. Soon the companions realize that this sound was actually the roar of a dragon. They keep their heads down and their eyes up, but they can’t locate the creature.

Thornalf, who found the entrance to an old mine a few yards away, in his night shift, suggests to investigate the place and if it’s safe they move the caravan there until they ensure the dragon is gone. Damien stays behind with the refugees as the companions followed by the paladin of Tyr, sir Vito Galliano, approaches the wooden door. A sign is covered by snow that writes

“Permanently closed down, due to an unexpected incident. 1374 DR, Year of Lightning Storms”.

Quinn discovers two broken crystals, between the rocks on both sides of the door, with the initials “D.F” carved on them. Olo looks through his magic gem and sees that the entrance is locked with magic. They try to force their way in but they fail to move the door. Sir Vito calls the power of his deity, and supress the arcane effect, allowing them to enter the old mine. Behind the door are broken seals of magic on the walls.

“It seems that no one step his foot in there for aeons! Max me boy go and bark if you see anyone.” , sais Thornalf and sends the blink dog to scout ahead.

After a while, they seem to have lost Max and they find themselves in a wet cave full of rubble and old mining supplies. Each one of them is overwelmed with thoughts of his deepest desire.

Thornalf, imagines he holds the Helm Of Thundergod, once again and puts a bucket on his head.

Quinn, sneaks behind the leader of Bregan D’Aethre and assassinates a sack of molded rice.

Olo, sits on top of his treasures richer that a dragon and roars sitting on a pile of rubbles.

Vito, cuts the head of Hartusk and holds up high a miners backpack.

As they dwelve into their dellussions the demonic pressence that haunts this place for over a century, manifest in the center of the cave. Its rotten flesh is prottected by a golden elvish armor and a vile longsword appears in his hand.

The heroes snap out of the demonic effect and fight the demon with all they got. But this is an enemy they have never faced before. Whoever locked it in here had a good reason to do it a hundred years ago. Each word that comes out of its abyssas mouth tries to poison the spirit of the living and each blow of its sword spreads death.

Is this the end of the road ?

At those times when defeat is almost certain, the fabric that heroes are made of is revealed. The companions transcend their fear, their pain, the physical boundaries of their mortality and defeat the demon. Finally, as the creature dissolves into nothingness, there is only silence and looks between them saying “That was a close one.”

Tough fella that Revenant. I was searching for my mother’s skirt by round 5 of the battle!

And here is the Revenant revealed (our encounter was slightly modified) :